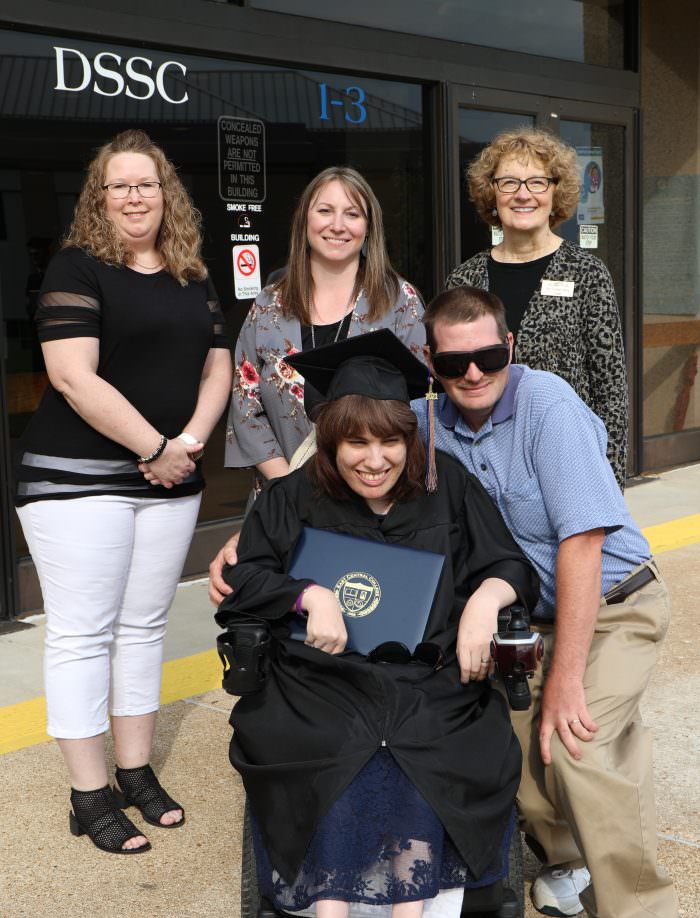 Every East Central College graduate has a unique path to earning their degree.

That’s no different for Class of 2021 graduate Heather (Luehr) Rice, but her accomplishment was 14 years in the making.

Rice, 35, of Union, first started taking classes at ECC in 2007. On May 16, she rolled across the stage in the Donald Shook Student Center to receive her diploma from ECC President Dr. Jon Bauer.

‘It was pretty emotional,” she said. “I never thought I would accomplish it.”

Rice has cerebral palsy, which affects her ability to move and maintain balance. She uses a motorized chair to get around.

Rice earned an Associate’s Degree in Psychology because she wants to help others like her, she said.

“I want to be an advocate for people like myself,” she added. “There are not many people who understand what I have gone through.”

Rice explained that she wants to work at a medical supply store that sells equipment for people with cerebral palsy to use in their daily life.

“I want to help people find the right equipment, because the majority of what is available, I have used,” she said. “I have had the experience of having a feeding tube, catheter and power wheelchairs — I am aware of the technology and how it can help others.

“I just want to be at a place to help others and be a source of encouragement,” Rice added. “If I had someone like that when I was younger, things may have been a little different for me.”

Rice first enrolled at ECC in 2007 taking three courses her first semester, but then life-changing events impacted her schedule.

The first of which was in 2009 when Rice nearly died on the operating table. She said her heart stopped beating before doctors saved her.

“My workload became too much,” Rice commented. “I started to take one class at a time.”

Then, about 11 years ago, Rice’s mother, Sheryl E. Osseck, died.

“That was a major point in my life,” Rice said, adding that she and her mother were very close and Osseck assisted her with many tasks.

But Rice persevered and continued with her education at ECC.

“I told myself it doesn’t matter how long it takes me, I am going to get it done,” she said. “And here we are, 14 years later.”

Rice’s graduation weekend was much bigger than crossing the stage during one of the ECC commencement ceremonies. On May 15, the day before she graduated, Rice married Steven Rice.

She met Steven through the Union Baptist Temple, a church she had been attending for several years.

Steven delivered groceries to Rice’s home and, one day, found her on the floor after a fall. Rice went to the hospital and Steven stayed there with her and the couple talked about faith and family.

“Steven and I really connected,” she said. “He stayed up all night with me.”

As it turns out, Rice added, the two had met while children but they hadn’t realized it initially as adults.

“So many years later we actually got married,” she commented.

According to Rice, her church family and her faith helped her attain her goal of graduating with a degree.

“If the Lord is in it, you will find a way to achieve what you want,” she said. “Just because I am in a chair doesn’t mean I can’t reach my goals.”

Rice’s graduation isn’t just making an impact on her and her family’s life, it potentially influenced a friend.

She explained that her friend attended the graduation ceremony and Rice’s accomplishment inspired her.

“After watching you, I want to go back and finish my degree,” her friend told Rice.

Help Along the Way

Rice said there were many people at ECC who helped her during her journey.

She made many friends in The Learning Center, and instructors who helped her along the way. She listed ECC employees Denise Walker, Amy Sisk, Josh Stroup, Cookie Hays, Wendy Pecka, Lisa Farrell, Dr. Bauer and Paul Lampe, as some of those who assisted her.

She added there were many more who aided her during her time at the College.

“They really believed in me and saw me not just as a person in a wheelchair, but as a student,” Rice said.

“East Central grew with me every year,” she added. “They were able and willing to provide assistive technology to help me be successful in classes.

“I greatly appreciate the opportunity to roll across the stage and receive my degree.” 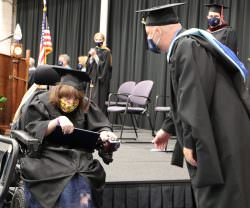