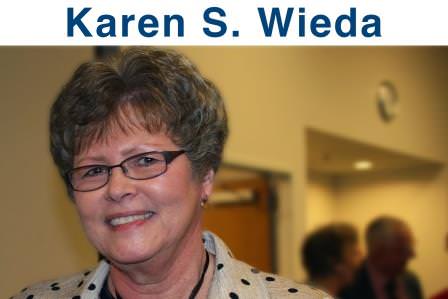 East Central College will honor former registrar Karen Wieda, the longest serving employee in the 48 year history of the college, by naming the Student Service Center on the Union campus in her honor.

The Karen Sue Wieda Student Service Center will be dedicated Saturday, May 7, at 2 p.m. in the lobby of Buescher Hall.  Dr. Terry Zanin, a retired ECC administrator who worked with Wieda for many years, will be the featured speaker.

The event is open to the public.  A reception will follow the ceremony.

Wieda started working at the college in 1969 before the first classes were held.  Her first position was faculty secretary, but she was soon promoted to registrar – the job she held until her retirement in June 2013. Her 44 years of service is the longest tenure of any ECC employee.

As registrar she took innovative steps to improve student services. In 2006, she was recognized by the Missouri Community College Association with the Technology Innovation Award for adopting an electronic document imaging system. Wieda later devoted many hours to converting student services to the one-stop model now in place. The Student Service Center was designed to facilitate this innovative model of service.

“Through her tireless dedication and positive spirit, thousands of students benefitted from the education they received and the credentials they earned,” stated Dr. Jon Bauer, ECC president.  “She led by example through her quiet grace, poise, and vast knowledge.  Many employees hired and mentored by Karen  followed her example and served the college for many years.”

After completing high school Wieda enrolled at Jefferson College.  She earned an associate degree in 1966 as a member of that institution’s first graduating class.

ECC instituted a facilities naming policy in 2009.  It states that the board may consider naming honors for an individual who had a lasting and measurable impact on the college.  Bauer noted that Wieda fits that description.  Trustees unanimously voted at their December meeting to name the Student Service Center in her honor.