Outstanding Alumni of the Year

There are many great East Central College alumni making a difference in their communities, and throughout the world.

The Outstanding Alumni Award was created to recognize those former students. The award is presented by the East Central College Foundation.

To be considered for the award, nominees must have completed a college credit course at ECC at some point in their educational journey.

According to Bridgette Kelch, Foundation executive director, nominees should be viewed by their peers as leaders in their field, with a demonstrated commitment to their community. Residency within the college district is not required.

“Our annual Outstanding Alumni award is the perfect way to recognize an alum’s commitment to their career and community,” Kelch said. “We know that many of our alumni are deserving of this prestigious award and are reaching out to the community for help to find those deserving individuals.”

Nominees should demonstrate outstanding contributions to ECC or the community, and nominees must have an ongoing commitment to ECC, she added.

Current candidates for public office and past recipients are not eligible for the award.

To nominate a former ECC student, write an explanation in 500 words or less as to why the person is worthy of consideration. The explanation should accompany the nomination. Nominations must be received by Wednesday, April 13, 2022. All nominations received within the last three years are eligible.

The nomination form can be found here, but can also be accessed from the webpage: www.eastcentral.edu/alumni/alumni-of-the-year/. People can also email foundation@eastcentral.edu or call 636-584-6505 to request the form or for more information.

The recipient will be selected by the ECC Foundation Alumni Committee. A formal invitation to the 2022 Commencement Ceremonies will be sent to the honoree and a plaque will be displayed at the ECC Union campus in his or her honor. 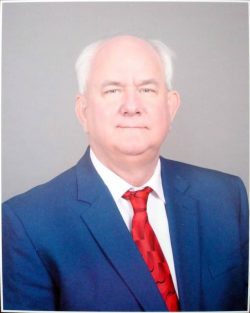 After graduating, his commitment to ECC never stopped. He has

been a donor to the Friends of the Foundation, a Patron of the Arts, has participated in the Falcon Invitational Golf Tournament, and discounts the ECC Foundation’s 990 preparation fee each year.

The Outstanding Alum award is the highest award presented to an alum by the ECC Foundation. It recognizes an alum who has brought honor to the college through professional achievement, leadership, and community impact. Unnerstall was chosen as the 2022 ECC Outstanding Alum for both his dedication and generosity to the college and commitment to help and improve his community.

A life-long resident of Washington, Unnerstall has been involved in several organizations, giving back to his community. Unnerstall has been a member of the Washington Rotary Club for over 30 years, having served on the board for seven years and a term as president. He is currently the Executive Secretary and Controller. He also volunteers as a financial advisor and helps with fundraisers for the Friends Foundation and Advocates for Community Choice, organizations that offer assistance and companionship for individuals who have developmental and intellectual disabilities.
“Tim never does seek praise for his countless hours of volunteering, but instead works to better the Franklin County community,” said Tim’s brother, Kurt Unnerstall. “I know of no one who speaks so highly of the need to have a community college than Tim.”

Additionally, Unnerstall serves as Treasurer on the Board of Directors for Exceptional Equestrians, a therapeutic horsemanship organization for those with disabilities. He also is a Washington Chamber Ambassador and a member of the Washington Elks Club.

For 10 years, Unnerstall served on the Emmaus Homes Board of Directors, including two years as president. He has been a member of St. Francis Borgia Catholic Church his entire life and supports the parish, grade school and high school. He also is a standing member of the American Institute of Certified Public Accountants which is an organization of peer accountants that approves CPA firms.
“Tim has been an incredible member of the community and we love that he is still a part of the ECC community too,” said Bridgette Kelch, ECC Foundation executive director. “The Foundation is very excited to grant the 2022 Outstanding Alum award to Tim and honor his impressive achievements. He certainly is deserving of it.”