The Donald R. and Barbara D. Means Library is located on the first floor of Buescher Hall
at East Central College’s Union Campus.
The phone number is (636) 584-6560.
Our text number is (636) 333-1154.
Online assistance is also available at https://www.eastcentral.edu/library/get-help/ 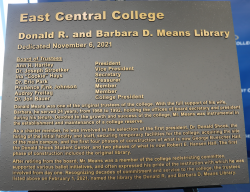 A ceremony dedicating the library as the “Donald R. and Barbara D. Means Library” was held on Nov. 9.

Mr. Means served 24 years as an ECC Trustee from 1968 to 1992. During that time, he served as board secretary for 16 years and board president for four years. After his passing in August 2020 the ECC Board of Trustees and Dr. Jon Bauer, ECC President, considered a way to honor his significant contributions to the college.

“Mr. Means was a voracious reader, so the library is a natural connection,” Dr. Bauer said.

Mr. Means was also a founding member of the Washington Rotary Club established in 1970.  He served two terms as club president.

“It takes a team to succeed and Don and Barbara were a team,” said John Vietmeier, Washington Rotary Club, past president. 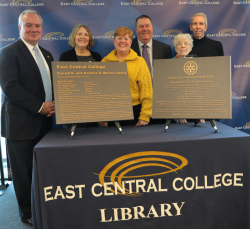